STILL finding things in the yard. Yesterdays weekdwacking unearthed a shovel buried in the grass against the house, and an axe along the inside of the fence. 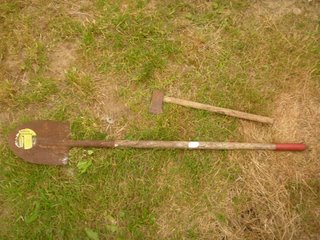 Things are poking out of the soil, its awesome. 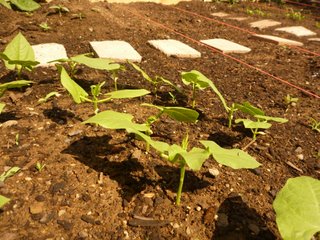 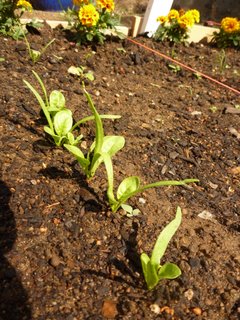 And um.. I can't remeber what this is either.. carrots? 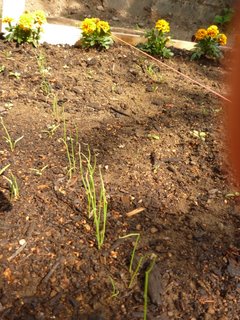 Golden oregano in one of my herb pots: 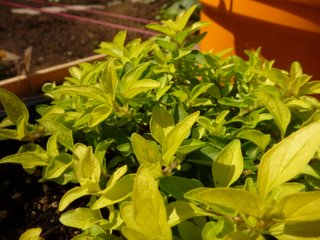 Preliminary expiditions show the basement bathroom is wired according to some magical plan I can't make sense of. I had hoped to remove two pull-chain overhead fixtures and connect them to the light switch at the door way, however they are not only on two seperate circuits, but thanks to the sheetrock I have no idea where they are coming from. The switch, the wall sconce, and the wall outlet seem to be on the same run as the laundry room, while the overhead fixtures come in from who knows where.

After getting the basement privy online I attacked the upstairs in an effort to remedy the 50% failure rate of grabbing the flush handle and getting no flush. The tank had a large plunger assembly for a flush valve, but upon inspection it became clear that it would only be removed by what must be a retaining ring on the outside of the tank.

The tank came off with little problem, and sure enough there was a 4" plastic hex nut that threaded onto the protruding valve and locked the assembly to the tank. This nut however was not coming up. Even after buying a monster pipe wrench to get the jaws open to 4", the amount of force needed to break the seal just resulting in chewing the plastic to shreds while not unlocking the seal at all. Enter the dremel. I just put on a thin grinding wheel and had to cut the plastic out. This of course insured that if I couldn't find a replacement flush valve at the hardware store (which I couldn't) that I couldn't put it back together in the meantime.

Good thing the basement is working. :/

It took another week or so to get a new valve assembly in the mail because all Seattle's hardware and plumbing stores only stock valves for tanks with a 3" opening... nothing else.

Well, today it's in, it doesn't leak, and it flushes. Now to fill the tank with rocks to save a little on water.
Posted by CJP at 16:28 6 comments: