I was finally going to update this with some old posts, but now I can't find the pictures I'd taken over the last few months to do so. Drat.

Let's see. . . There hasn't been a lot of projects around Chez Chasemen this summer. After painting last summer we decided to take this season off from major projects, and just live, have fun, enjoy our home, each other, and our friends, and we have been doing that. We had a great visit from and old friend in from Argentina for a few days, a local friend who was between housing options and travel who stayed for a week or so, and then later in August my sister came for several weeks, so the guest room has seen its fair share of service. It's really great to have the space to make friends welcome if they visit. It's nothing fancy, but beats couch surfing or sleeping on floors for sure. Retro-active mad props again to Juno for making that space as comfy as it is.

Our garden got a late start this year and hasn't been as fecund as our first summer, but we've learned more about the seasons and soil and sun and shade here. Our beans went MAD and we still have ziplock bags full of them in the fridge. We had to build some wire and wood ladders to keep them upright, they were so lush they could hardly support themselves.

A similar reinforcement was strung along the lines of the raspberries as they too grow up fast, but don't have much girth to heep themselves in place, so we help them along.

Since the garden adventures we have begun trying to overcome the inertia that some of our possessions have accumulated. Some things you can't find a place for right away; you need to let them find their own homes, depending on how things are needed and used. Some of that is organic, and makes sense. Unfortunately that also lends itself to some things just sitting in places for no good reason. It drives me crazy, but I don't like to get too frantic about it, because trying to force a fix is not always very successful either. We found a nice used file cabinet on craig'slist, and with some quick turns of screws, and 2 cans of Rustoleum Applicance Paint, we dressed it up a little and moved into the office in an effort to get all our papers and files and grownup stuff all policed up and organized. It was a great start and spurned on some other office organization. The next project is to replace Aimee's desk and get some small storage stuff sorted out between our desks for all her daily carry items she needs for her photography business.

We took the long, fun, detour route to solving the desk replacement issue by getting an awesome new dining room table. The old table will become her new desk, and once thats in place we can tackle her storage issues and fill in around the smaller desk with shelves and whatnot. The new table is really pretty. We are such suckers for unfinished wood. . . it's probably 6' long with the leaf in it, and ~3" across- all nice raw beech wood sections, laminated along the short axis. We entertained a lot in the last year, now that we're the people with the big living room and dining room, and we were always crowded around this nice but small table I got Aimee for her birthday one year back when we had the little apartment on Republican. This will make dinner parties, game nights, cookie making, and all the other nonsense we get up to with 5-10 of our closest friends way more manageable.

The bigger table meant my old prep table no longer fits in the dining room; which is great because it was wasting space there anyway. It sort of ended up there by default, and never moved (see 'inertia' above). We also picked up a nice 5' sideboard to go under the North window, which will further facilitate the dinner party action, and offers drawers to stash away all the napkins and placemats and crap we had piled up on the old prep table. It's quite soothing in a weird way, to have some furniture that more fits the space than the old stuff did. Now I /really/ want to paint the dining room, and pull it all together. Painting the remaining rooms is something I am trying not to rush (we're terrible at agonizing over color options), but at the same time constantly gnaws at me. I feel like we're in a hotel when I see the massive expanse of boring, ugly, soul-deadeningly beige walls that still haunt most of our house. It bothers me in part because of its lifelessness in gerneral, and because I feel the application of color to be both 'nice' (sure), but more so and active statement of expression or purpose- I want our house to have some personality, or at least reflect ours. We are not beige. Not only all of that, but in the winter when we don't get much daylight, and what we do get is grey and flat, and what we see outside that isn't clouds is bare wet brown trees, and muddy grass, I want to be surrounded by colors. Warmth, peacefullness, the safety of the hearth and all that jazz. I LOVE our orange studio/office so much simply because it is like being in a pumpkin patch, or a sunset /every day/. The same with the bunny room. The vibrant green in there reminds me of tangy apples, leaf buds in spring, and laying in the grass on a summer afternoon. On any day I can soak up a bit of those emotions, just by sitting in there for a half an hour.

I don't if everyone gets so worked up over colors... maybe its because I paint all the time, and I have a pretty personal relationship with lots of colors in a way thats hard to describe. I think I have a bit of synethstasia at times. I hear them in a way. The color of a room whispers and hums to me, wafts scents to me, and treats my eyes to far more than just an opaque plane of a spectal wavelength bounced back on my retinae. I get lost in the glow of our orange room. I'm hypnotized by the electricity of the green room. I'm yearning for our other rooms to have some personality too . . . I want to hear what they have to say when the plaster cast and splints of beige drudgery are removed and they can run around and sing songs to me in their new colored voices.


Also, I like the color of freshly oiled beech in our dining room: 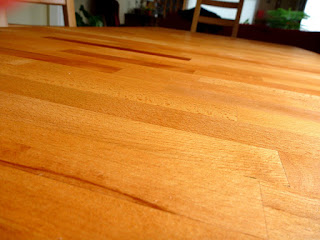