I just realized I didn't write a single entry here in 2011. We were not without projects, but I never got them collected. I'm not sure that it matters, like most things... it only does if you decide it does. Since I'm sitting here on a day off, making mental lists of everything I wish was different about our house, maybe remembering some progress that we actually made this year will help me from getting too depressed about how much I feel we've not done and how we've let our inertia impede our progress. Maybe it'll be motivational going forward? Maybe its just procrastination. Either way. . . we did some stuff this year. Here is a glimpse.

I don't even remember how it started... I think we just decided to paint the bathroom. While we were at it, we took out the metal track that was still attached to the walls and tub from the crappy sliding doors that were originally in the bathroom. 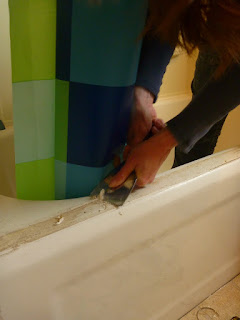 The door tracks left some weird anchors in the tub surround which needed to be dremeled out and the holes filled with putty. 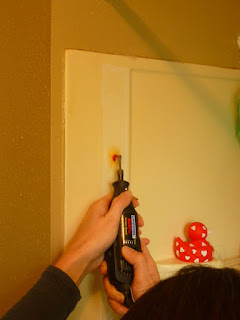 Luckily we have very little else in the bathroom aside from our medicine cabinets and a few light fixtures, all easily removable. 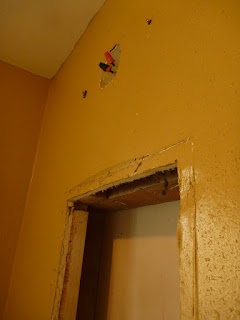 And after that its just taping, priming, and blueing 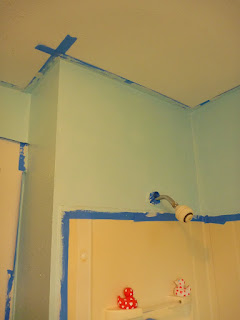 We were quite happy with the results, and having made a small step in the right direction against the legions of ugly brown paint that currently inhabit our house (see earlier post) really was exciting and refreshing. Then a week or so later, we found water in the basement. I looked around, thinking something had leaked in the floor, through our basement door (as has happened during massive seattle rain storms), and was very confused and couldn't find the source. Then I noticed the door jamb was damp. And the wall was damp. And. . . the . . .ceiling ? was damp? Uh oh. Out came the clawhammer and saw.

The ceiling was damp because there was water dripping down from the upstairs bathroom plumbing. Through trial and error we determined that it was only when the shower was engaged. The extra pressure built up when the shower lever was engaged would cause water to egress through the gaskets in the faucet knobs, and out the back, where it just ran down, fell through a whole in the floorboards for the pipes, and was pooling on the drywall ceiling of the basement, and soaking it all.

I tore out all the drywall and insulation and slowly began to realize I was going to need to learn some plumbing skills of some sort. After poking around and considering various means of getting access to the shower pipes and fittings, we decided there was no way we were going to cut a whole in our hallway wall and create an access panel there. Putting it all back together would be a huge project. The only other option was to tear out the tub surround. Over the next few days I fussed and trialed and errored, and learned about plumbers tape, and gaskets, and stems, and stuff. There was more than one aborted attempt at putting it all back together, but we eventually got there. The piece of sheetrock I had to cut out of the wall behind the surround was a curious shape, but at least I left room to access the faucet joints in my replacement piece, should we need to get in there again. 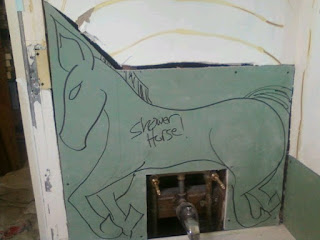 As long as we had pulled out the yellowing and ugly shower surround, we figured we might as well reward ourselves with a newer replacement. We didn't opt for anything fancy, but at least its not a decade or old more and disgusting looking.
Installing the surround turned out to be its own set of challenges, but eventually we came up with a system of braces and dowels and 2x4s that held the rather heavy wall pieces in place while the adhesive set. Aimee went to town caulking all the seams, as she is by far the better of the two of us at it.

As long as we were tearing everything apart, and in anticipation of a visit from my parents, we added some more towel bars to the bathroom door as well. I'd had been scratching my head on this for a while as most of the doors in our house are cheap, rather shitty hollow affairs from Home Depot, and thus hard to put anchors in. I solved this by drilling into the door and shooting a generous amount of hardening insulation foam into the hollow space. Once this hardened, I could drill into and give the anchors something to push against. So far, no towel bars have fallen off.

Another addition I made was a little set of cubbies in our window well. Our bathroom has very limited storage, and so I thought this would give Aimee a place to stack her little bowls of jewelry as she prefers to take it off in the bathroom at night. They also added a little variety to the space, and gave us a place to put little doo dads, statues, and Lego people who occasionally visit our bathroom. 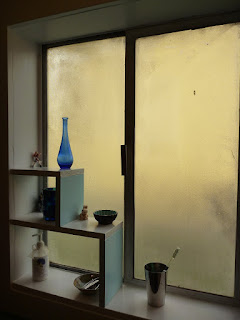 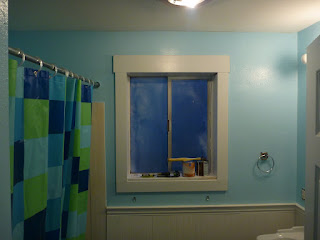 We also decided to take advantage of a sale we saw for Flor tiles, and give those a shot in the bathroom, even though they technically don't have a 'damp enviornment' tile type yet. Hopefully they won't wear out really quickly, as they look great, and really make us happy. 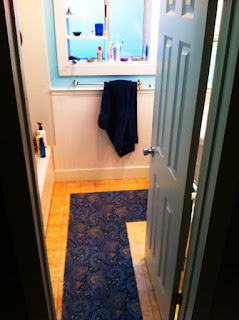 One last little touch we came up with was some portholes in our shower. One sea turtle, and one sea dragon. They are totally silly, and after all the hassle and days without a shower, adding something lightheared and goofy to our house really made me feel better. This is the kind of stuff I like about having our own place. 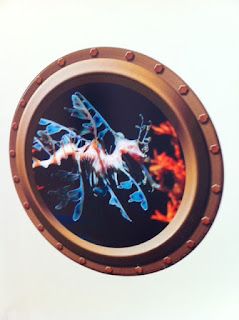 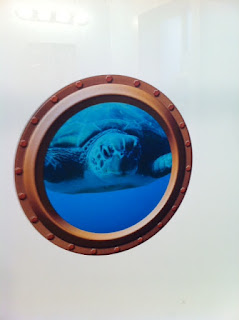 While we hadn't intended to anything more than give it a fresh coat of paint, we're really happy with the more lively and jovial space that we've managed to create for really a pretty minimal amount of work. It makes me smile everytime I get up in the morning, which is really about all you can ask for.

Also, its really nice to have good friends a few blocks away who have a second shower. And a gym membership. And showers at work.

I also found a way to recycle the old tub faucet that really made me happy. I was glad to be arting up the neighborhood a little, but some jackass stole it from the utility pole in front of our house. 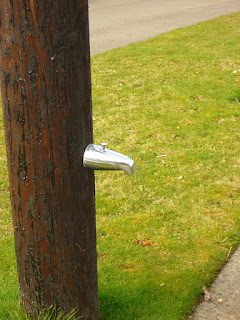