Our gate was a rotted piece of crap. So I took it down and chipped it last spring.

Then I cut lumber for a new one.

Aimee helped me assemble it. 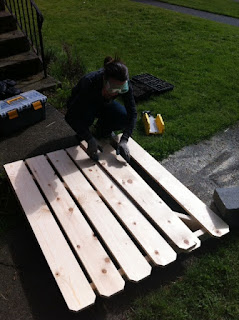 And when we hung it, it was solid, square, and swung smoothly on the first try! 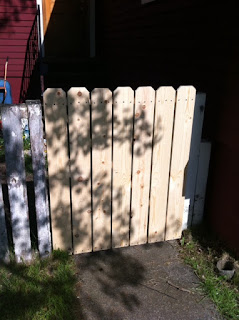 Inspired by my success at that, I knocked down the dumb section of the rear fence that served no purpose. I Ieft the other half of that run, as currently it forms one wall of the rabbitat. Until we decide what we're going to do with that area as far as a patio or a shed goes, I'll leave it there to pen in the bunnies when they're out for a run. 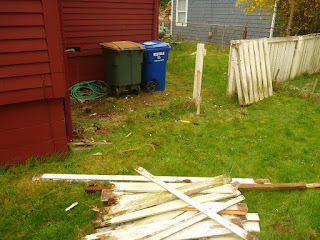 After that we started sanding and stripping the fence on the whole front and south sides of the house. That was super annoying, but we kept at it off and on over the summer until the whole thing was scraped as clean as was worth doing considering the age and condition of a lot of the wood.

We even managed to get it all painted sometime in september, before the rains started. It looks about a bazillion times better now.

I can't find the pictures I took of that, and its raining, so I don't want to go take more. Watch this spot if you really want to see some nice white fence sections that have now been rained on for 3 months!
Posted by CJP at 15:06